They say that parenting is the hardest, yet most rewarding job. Dads play an equally important role in parenting as do mothers, but sometimes their importance gets overlooked. How do Dads make a difference? Here are just 5 of the many reasons why:

1. Dads have an impact on their child’s behavior.

Data from three waves of the Fragile Families Study (N= 2,111) was used to examine the prevalence and effects of mothers’ relationship changes between birth and age 3 on their children’s well being. Children born to single mothers show higher levels of aggressive behavior than children born to married mothers. Living in a single-mother household is equivalent to experiencing 5.25 partnership transitions.

Father involvement in schools is associated with the higher likelihood of a student getting mostly A’s. This was true for fathers in biological parent families, for stepfathers, and for fathers heading single-parent families.

Source: Teachman, Jay D. “The Childhood Living Arrangements of Children and the Characteristics of Their Marriages.” Journal of Family Issues 25 (January 2004): 86-111.

How did your father make a difference in your life?

Father’s day is fast an approaching. But before you rush to buy him yet another tie or toolbox, try getting a bit more creative. There is nothing more memorable than the gift of a unique fathers day experience. From sharing a hot dog in historic Turner Field to witnessing a sunset on top of Stone Mountain, there are tons of ways to celebrate father’s day in north Georgia. To plan a day he’ll remember, check out these ways to celebrate your dad this father’s day.

Enjoy multicultural food from nearly 100 cooks, chefs, caterers, and restaurants this father’s day at the 2nd annual Family Food Fest Atlanta! Share some of the best foods Atlanta has to offer with your dad this Father’s Day.

Strengthen your bond as teammates with a fun-filled urban adventure this Father’s day at The Great City Race. Explore the Beltline and solve clues at metro-Atlanta’s turbocharged version of the TV show “Amazing Race.”

Come out to Stone Mountain Park on Father’s Day to enjoy a vintage car show featuring Camaros, Mustangs, Chevys from the 1950s and more.

I don’t know about you, but other than being ridiculously hot, June was also ridiculously fun. Around here at ESNG, we had a lot going on. Here are some of the many highlights of June, ICYMI:

Live:
One Father is Better than a Hundred Schoolmasters – George Herbert
While May was all about moms, teachers, and women’s health, June focuses on the men in our lives. Last week’s blog posting was about how our dads shape our lives. It’s important that we kept these men healthy and a part of the daily lives of our children.

One of our favorite ways that ESNG’s Sylvan Hills Child Development Center keeps their dads engaged is through monthly “Fatherhood Meetings”. It’s in these meetings that dads can share their struggles, ask questions or brag about their children. Mr. Moseley, a dad whose four children have completed the Head Start and Georgia Pre-K programs at the center, provides guidance to help make sure his community has a generation of engaged, strong and playful dads.

Sylvan Hills also celebrated fathers with a Fatherhood Extravaganza back in April.

Ms. Patty Saves the Day
Patty Toledo, an ESNG Early Head Start teacher at our Madison Co. Child Development Center, recently received some publicity for her heroic actions at a local grocery store. Read about how she helped save a choking child thanks to her quick thinking and First Aid training!

Learn:
Jackson County Center Garden: Sprouting Knowledge
Did you know that June 17 was “National Eat Your Vegetables Day”? I’m sure your children were hoping you didn’t! Our children at our Jackson Co. Child Development Center are learning all about vegetables and healthy eating. What better way to learn than to do? With the help of their teachers they planted a garden in May and are beginning to see the fruits (or veggies) or their labor. The kids learned that you need sun, oxygen and water for the plants to grow. They are also more willing to try these healthy and delicious foods because they took part in making them grow. We cannot wait to see how great the veggies turn out!

End of School Year Celebration and Awards
Our staff celebrated the end to yet another successful school year on May 28. At the luncheon, staff from ESNG’s child development centers, Babies Can’t Wait, Champions for Children, Foster Grandparents, and administrative offices were recognized for their years of service and exceptional work. Read all about it here.

Play.
Volunteer Spotlight: AutoTrader at Warsaw
Kids at ESNG’s child development centers love to learn through play. They, of course, feel like the most fun people to play with are our volunteers. Our kids at our Warsaw Child Development Center had the pleasure of playing with and learning from 15 volunteers from AutoTrader. Here are some highlights of all the great work these volunteers did for us and our children.

Activity Spotlight: Winder March Madness
Way back in March, our Winder Child Development Center had their own version of college basketball’s March Madness to engage dads in their children’s schooling. Each dad received points for participating in activities. For example, a dad would get 1 point for drop off or pick up, 2 points for volunteering in the classroom, or 3 points for attending a parent committee event. The winning dad, pictured here, won a $50 gift card. 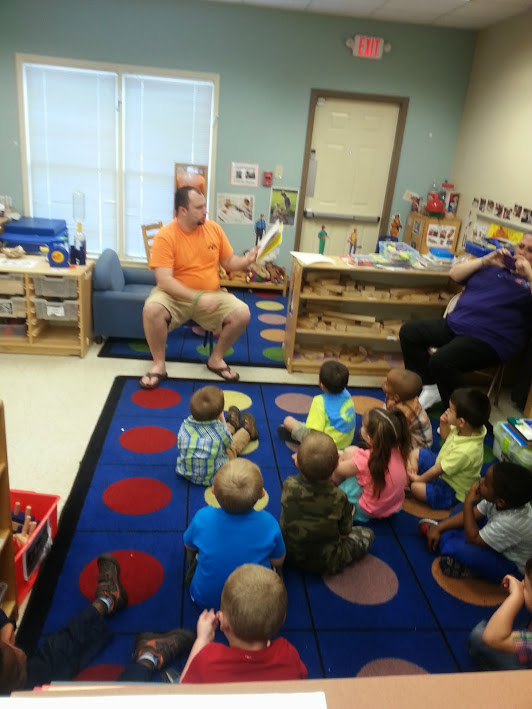